Awhile back I had seen this idea on another blog. I have no idea who to give the credit to, but it is a clever idea. It's a pretty complicated recipe, so I'll go slow.
1. First you take a can of fruit cocktail.
2. Then you freeze it. 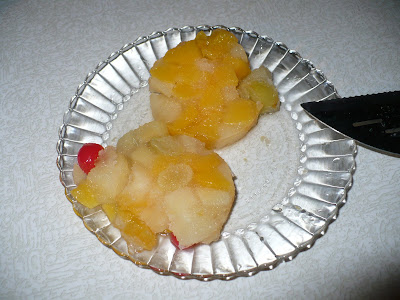 Yes, you freeze it right in the can. No, it won't burst open. 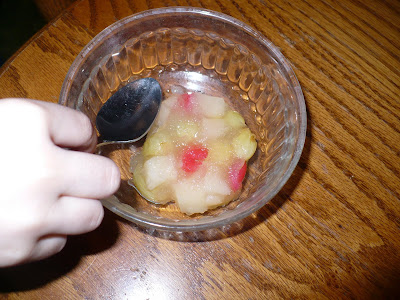 When you take it out of the freezer, you will have to let it sit for a little bit or run some hot water over the outside of the can to loosen it up. We removed both ends from our can and it finally slid out. Then we cut it into slices. 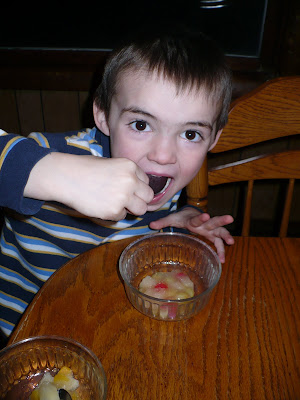 Some notes about this recipe. When I first saw this recipe, I thought it would be disgusting. Who wants fruit that has frozen heavy syrup around it? Then I found a can of fruit cocktail that was prepared with pear juice (it was labeled "lite"). Also, anyone who has ever had fruit cocktail knows that the fruit is not always evenly distributed, especially the highly prized cherries. They were all at the bottom of the can. Isaiah was more than happy to take that slice as you can see above! One of the other layers was also mostly peaches. I guess if you have picky eaters in your family, this might be a good way to give everyone what they want! :)
Overall, I thought it was just OK, but the boys really enjoyed it, so I'm sure we will be doing it again.
Posted by Lura at 6:00 AM