Teaching Kids to do Dishes

I've known for awhile now that I need to have the boys doing more "chores" around the house. They are old enough, and frankly I'm tired of doing everything. (Plus I want my future daughter in laws to love me). I'm also wanting to start some sort of allowance with them and I would like them to earn it.

A couple of weeks ago I decided to let them try washing the dishes. We do have a dishwasher, but I think everyone should know how to wash dishes by hand. We always have things that either won't fit or can't be washed in the dishwasher. There is never a lack of dirty dishes.

The first thing I had the boys do was check the table and the living room for any dishes/cups that may be floating around the house. Then I filled the sink for them. I wanted it to be warm enough to kill some germs, but not too hot that they wouldn't want to stick their hands in the water. I also put a couple of thick washcloths in the rinse water. That way if they dropped a dish, it would have a better chance of surviving. 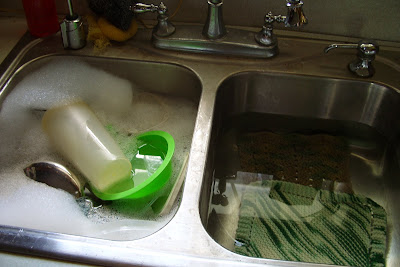 I put the dish drainer on several towels. I usually keep it in the sink when I do dishes, but thought they would do better with rinse water and then the drainer to put them in. 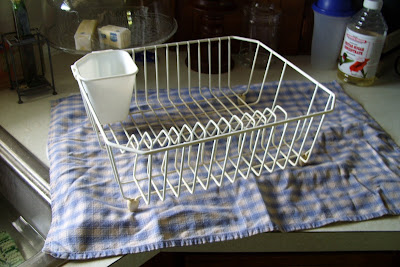 My pictures are a little backward. This is Tyler toward the end of washing dishes. He put his apron on because he was getting wet. These pictures were taken a couple of weeks ago, before we turned on the air conditioner. It was hot and everyone under the age of 7 ran around in their underwear most of the time. 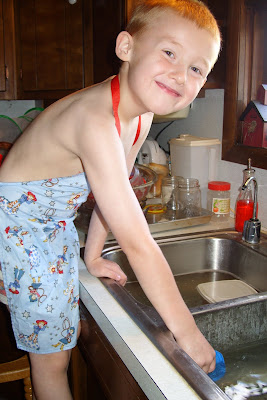 Tyler was so happy to be helping! 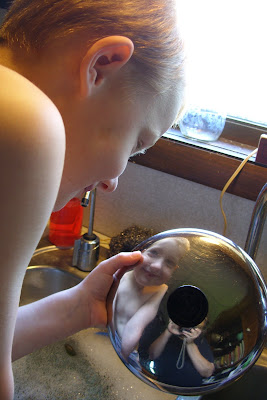 So clean you can see your reflection! ;) 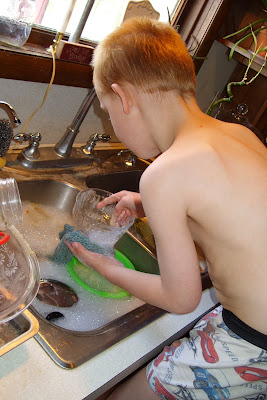 We talked about how to wash the dishes. I stressed that it was very important to not only get the food off, but also to wash where anyone had touched the dishes (ie: lips on the rim of a glass).
It was somewhat of a struggle for me to let them do this. It took time. It made some mess. The only good part was that even if only 50% of them got clean, that was 1/2 that I didn't have to do! Tyler had a much better percentage than that. I think there were only two or three things I rewashed. I did end up not letting Isaiah finish as he was more interested in playing in the water with the bubbles.
I haven't really let them do dishes since then. I really want to encourage them to be independent, but it's so hard to let them do it.

Do your kids do dishes (the old fashioned way)? At what age did they start doing them? Do you give your kids an allowance? How much? Do they have to do anything to earn it?
Posted by Lura at 12:33 AM

Both of our boys learned very young. Sawyer even younger because he is such a handful that it is/was an easy way for me to have him with me away from the others. We always prewash our dishes so well before the dishwaser that they are practically clean. So, my boys have done the prewash many many times. Sawyer sits up on the counter and scrubs the dishes until he sees nothing on them. I rinse and put them in the dishwasher. As much as it is hard to fit in, our boys also have been taught measuring, flipping food, taking the trash out, cleaning up dog poo, washing out the dog dish and refilling it. They both vaccum although not real effectively yet. They both can wipe down the bathroom with Clorox wipes very well. They love all of it. They don't like cleaning up their toys though, that is mundane to them!
We do not do allowanes at all. I do a lot of charts the moment a behavior needs to change. They earn stickers and then get to do soemthing special when they earn so many.

oh and i love the reflection picture..so great!

We don't usually wash any dishes by hand, but ever since he was about 2, I've had Tanis help by doing "dish hunts" - he goes and looks for any stray dishes around the house. (we have a song for it, too; we're a little weird) This summer i've had him load the dish hunt dishes in the dishwasher. I've also been teaching him to help with laundry. He transfers it from the washer to the dryer for me, and he helps fold and put stuff away. It's hard to let him fold, because it's messy and I want to redo it all, but I just remind myself that it doesn't really matter as long as it is clean and put away.

We haven't done allowance yet; mainly because the brief time we tried it, I never had cash in the house and it just didn't work. For the school year this year, I've been thinking about a job chart. His daily jobs last year were to feed the cat, make his bed and practice piano. We need to try it again, and actually enforce it this time. (the poor cat! she's hungry a lot)

Tyler looks cute in his apron! :)
Don't you have a dishwasher, like an electric one??

My kids would do them if I asked them to. They put dishes away from the dishwasher. Jacob was doing it when he was probably 4ish. Travis was probably 5 or so. I can't remember that far back. ha.
Yes, my kids get allowance. I don't think we started allowance until they were maybe 8. I think Jacob was 8. I sort of forget. We stopped giving it for a long time. They don't get it every pay period if money is tight. We don't give it to them as payment for chores. It is given to them because they are a member of our family. We did do it for chores at one point and it got to be a thing where Jacob would only do something if he was given money for it. Um, no. So we switched it up and decided that they would get it for being a member of the family, but if we didn't have extra, they wouldn't get it. They do their chores because we all live here and we all are going to contribute to the upkeep of our home. If I ask them to help me, they help me.
They get $10 every pay check - every 2 weeks. They use it for toys and stuff like that. Jacob wants more, and we would give him more if we had more to give. He is good as saving his money and I know only getting $10 has helped them both learn how to save for things. It's helped with that whole instant gratification thing. They have to save up for things that are more expensive.