Since "New Recipe" doesn't rhyme with anything, I guess I can post them on any day of the week!
Yesterday I tried 3 new recipes. I have cut out so many recipes and bookmarked so many recipes that I could never live long enough to prepare all of them!
I had purchased a 5lb. "chub" of meat and needed to cook it up. I have also been wanting to do some freezer cooking to stock up for those nights when I really don't feel like cooking (which seems to be just about every night anymore). I really love to cook, but at the end of the day I feel uninspired and just want something easy and fast.
My first two pounds of ground beef went into making these meatballs. Tim and the boys declared them yummy, so I will be keeping this recipe. (This recipe is from the Kraft Food and Family magazine). They were very easy to make and have stuffing mix as an ingredient. To make the meatballs, mix 2 lbs. ground beef with one package of chicken stuffing mix. Add 1 -1/4 cup water and 2 eggs. Mix all together with your hands and form into balls. Bake at 400 degrees for 20-25 min. or until browned and cooked through. See, told you it was easy! I flash froze mine on a cookie sheet and then put them in a bag to freeze for later use. 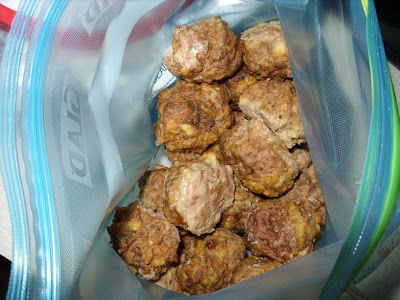 I then cooked the remaining 3 lbs of hamburger. One pound was set aside to make Bubble Pizza. Tim said it was a little bland. I liked it, but next time I would use pepperoni and some other pizza toppings in place of the ground beef. It was quick and easy! 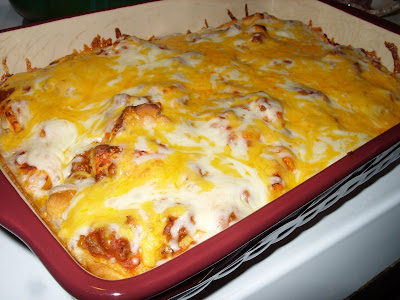 The last two pounds of hamburger went into Brown Bag Burritos. I have had this recipe bookmarked for awhile and just got around to trying it. This is my freezer recipe and not only will I be able to pull them out quickly and nuke them, but Tim can also take them in his lunch. Tim and Isaiah both like the taste test although Tim said he would rather have them with more enchilada sauce on top and cheese served with sour cream. 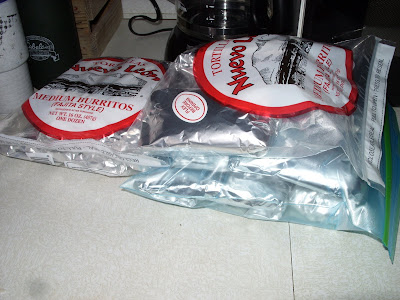 If you want to see actual pictures of these, go to the recipe link.

All in all a productive day I'd say!

I will probably try the meatball one, I love meatballs!