Last Friday we had a play date at Kellie's house. While I was there, Kellie graciously allowed me to pick mulberries off of her bush. Isaiah loved picking them and eating them and it was so much fun to watch him! I had no idea what I was going to make with the berries and honestly I wasn't even sure I was a fan of them. As you've probably figured out though, I am a big fan of free food! I did think that perhaps I would try a mulberry pie. After all, if you add vanilla ice cream, it can't be that bad! 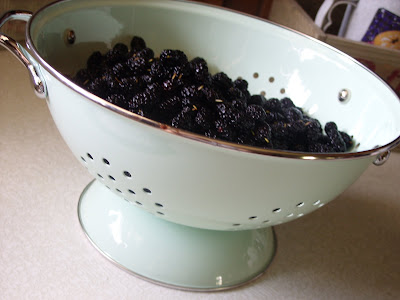 I have to show off my new colander. I have had serious colander envy ever since I saw Katherine's and how cute it looked full of cherries! I think it reminds me of our grandma and country life in general. I found it at Lehman's. 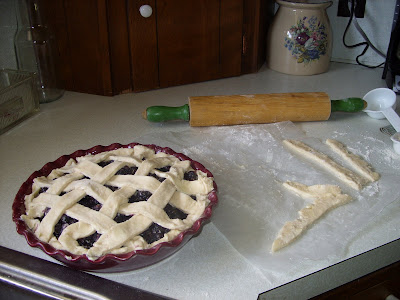 Here is my pie ready to go into the oven. The pie plate was also found at Lehman's. In the background is my other grandma's rolling pin. I have such great memories of both my grandma's and miss them a lot! 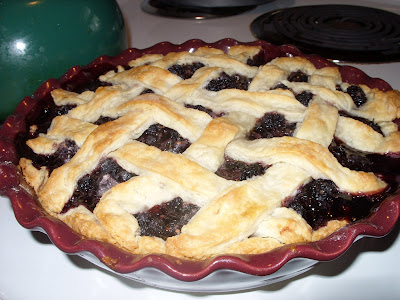 Fresh out of the oven. The pie recipe I used can be found here. I did follow the advice of some of the reviewers and changed it by using 2/3 cup sugar and 1/3 cup flour. I also followed the advice of leaving the stems on the mulberries. You really don't even know they are there and it saves a lot of time and hassle! I can not fine my pie crust recipe (I use a different one every time). I will keep searching though as it had several compliments! The crust used all butter (no shortening) and a little bit of sugar. My parents both liked the pie and neither one was a mulberry lover beforehand. 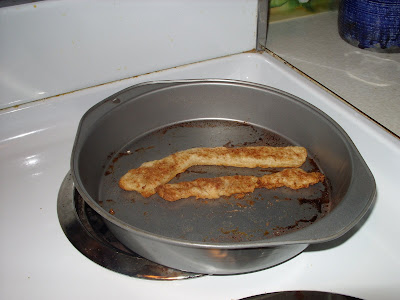 The best part of making pie? Leftover crust, cut into strips, and sprinkled with cinnamon sugar and baked. Mmmm.

I don't like fruit pies but the extra crust...now that I could go for!!

not pie eater but the crust looks awesome

It looks pretty good. I'm not crazy about fruity pie, but I'd probably taste it just to see what it was like.

Yum, I love pie!! I've never had mulberries though, so that would be different for me!! Did the boys have any?

I thought the bottom pic was bacon.

I'm glad the pie worked out. I'll have to try one.

Amanda, I think you need your eyes checked!