Charity and I had a great weekend a week ago. She stopped at our house on Friday afternoon, said a quick hello to Tim and the boys and then we made our escape. We headed towards the retreat and I talked her into stopping at a church rummage sale. We found a couple of deals. Then we stopped at my mom and dad's for a minute.

We got to the retreat and saw my friend, Kathy who shared the other 1/2 of her sub with us, so supper was covered (at least until late night snack time). That night the main speaker was Lisa Welchel, "Blair" from the Facts of Life. I enjoyed listening to her. Afterwards, we got to meet her and have her sign books for us. Then we got our picture taken with her. 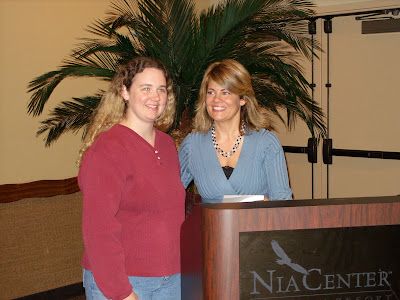 Afterwards, we went to our hotel (I use that term loosely). OK, I think any hotel might just seem a little bit more spooky at 10:30 pm when it's located behind a Mexican restaurant and there are only 2 other people staying there. At least Charity set up some high tech security. 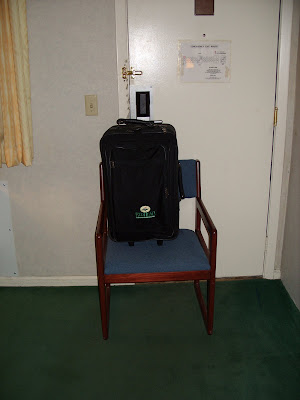 Then we headed off to Meijer for some snacks. We went through the Wendy's drive through to get a burger. The woman there asked us if we had heard the tornado sirens. Huh? Uh no. How long ago? About two minutes she tells us. It wasn't even raining or windy. Charity worried and I prayed and we went back to the motel to check out the weather on our computers (free Wifi was the one thing this motel had going for it, that and it was only $40 a night and that included the tax). We chatted with our husbands online and decided we were not in any danger.

On Saturday morning, we headed down to the "hotel" lobby to check out the free continental breakfast. I think there was one piece of toast, 3 danishes and a muffin. That was it. Thankfully we had some donuts left over from the night before and on the way to the retreat, Charity ran through the drive thru at Starbucks.

We made it into the building just as the retreat was starting and ended up sitting in the back section with a couple of other people. After a half hour or so, we saw my friend Kathy who was heading out to the bathroom. She told us they had seats for us up front, so when she came back in we followed her up there. I guess maybe we were maybe 6 rows from the front. Pretty close. The next speaker was really good. Her name was Linda Isaiah. She had just lost her mother two weeks ago, and her message was very good. She was definitely "real" and said things how they were. The rest of the speakers paled in comparison to her, but weren't bad. For lunch we went to Panera with Kathy and her friend. Then back for the rest of the retreat until around 3 pm.

After we browsed the vendors (I bought a cookbook from one of the speakers), we headed over to the arcade. We had so much fun playing games (Deal or No Deal). 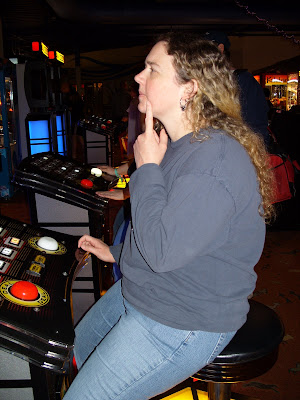 I think our favorite was the candy crane. We won a bunch of tickets (which I ended up losing the receipt to). Then we headed over to a pottery place in the resort. We picked out mugs to paint and spent the next 3 hours painting and talking. Not just chit chat, but really deep conversation about our beliefs and things we had heard at the retreat. 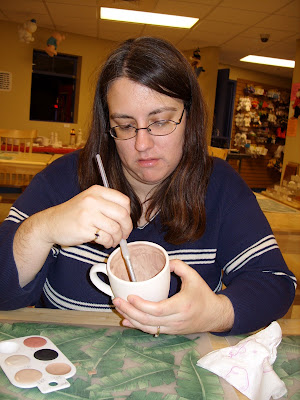 After that we went out to eat at Fazzolis, carb o rama baby! We spent more time there gabbing about girl stuff (things that can't be mentioned on a family friendly blog). Ha ha. We went back to the motel and played on our computers and watched TV. I fell asleep before the movie ended, but I think that was 2 am.

On Sunday, we slept in and then went to check out. We went to Target and then to Borders. We spent lots of time browsing books. Then we went out for lunch at The Weenee Hut. Charity wanted Panera again, but I wanted to try something new. And, I'm all about classy joints. 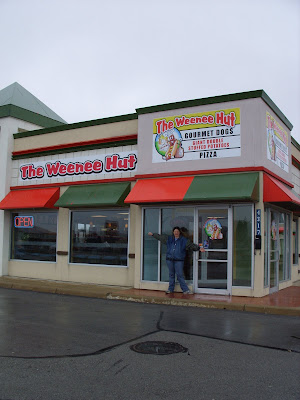 After lunch we went to Panera for dessert and coffee/chai. We did mad libs that I got at Borders and enjoyed the last fleeting moments of our time away. 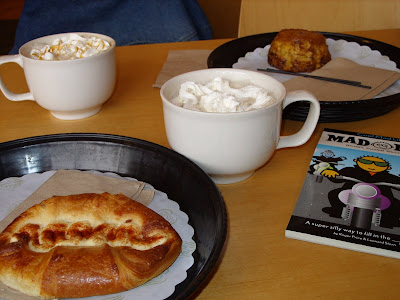 It was a great weekend. I love my sister in law. The end.

wow, I would have LOVED that weekend. Is it abotu homeschooling or no? Is it just about being a mom? I want to knwo because I want to go to one. I want an idea of what it is. Oh i would love it.

I have always wanted to meet Lisa Whelchel!! She is fantastic! She's such a strong Christian woman and a big fan of homeschooling. I really would love to go to one of her momtime getaways!

Your weekend sounds amazing.....I am so happy for you two for getting a girl weekend, how fun! Can't wait to see the rest of the pics!

That does sound wonderful! I am glad you had a good time. I want to see pictures of your mugs! It is so nice to get away with a really good friend once in a while and just be.

Are you kidding the additional security!! I know where you were and come on...

Glad you had a great weekend. Some day I may get to have a day away..no way would I get 2 nights and 2 days!

We didn't stay at the resort. We stayed at the Econolodge. Therefore, the need for extra security. Ha ha.

I think you covered everything! Wow, I felt like I was living it all over again. Then it ended AGAIN and I was SAD again! :)
You are right, Linda Isaiah was wonderful! She was inspiring and funny and she tells it like it is. She was great. The comedian lady was funny and I laughed a lot, but Linda was by far the best speaker.
The Weenee Hut was really yummy! I'm glad we went there, in the freezing rain/snow mix, to eat weenees and potato's.
The "hotel" was just wonderful! I mean, after we checked under the bed for dead bodies and made sure a masked murdered wasn't in the shower, we were good! Free Wifi, donuts, snacks, my FSIL..... what more could one ask for??!!
On Sunday, I took Lura back home and played with the boys awhile. Then I still had a 2 hour drive home! It was hard to stay awake and it was a lonely drive after having Lura to talk to for the whole weekend. Girl talk is just different than husband "girl talk". I think Lisa said it - girls just need to talk to other girls. It's the way we are built.
I got home and was greeted to a clean house, clean, folded laundry, a smiling husband and boys, and 3 big hugs! It was great! Every girl should get away. It makes you more appreciative of your family and makes them more appreciative of you. :)

thanks for answering my questions Lura!!!

see if i come back here

It is just for women in general. This is the first one that I've ever been to that had any aspect of homeschooling in it and that was just briefly touched upon by Lisa Welchel. Usually there are just several different women speakers who talk and share their stories or give a lesson or talk about how to do things. One I used to go to you could pick which sessions you wanted to go to. This one was just one big session for everyone. One we went to had crafts you could do, a home decorating class, and a self defense class. They all have singing and praise time. Some include your food, others have you break for meals on your own like this one did. This is the first year that this one has been held, but it sounds like it will be an annual thing. There are other retreats that have been going on for many years. My mom and I used to go to one called Women Anew. You don't have to spend the night if you don't want to, but it's usually more fun and you feel like you are away. Does that answer what your inquiring mind wants to know? And Crystal, what is it that you are dying to know that I haven't answered? :)

thank you even though the sarcasim was not needed

i guess I did sound serious but I was only kidding