Some of you had asked about it and I have wanted to post some neat things from it, so here it goes.

On the Saturday after she died, we had a family viewing at the funeral home. I was OK for the most part, but seeing other people cry makes me cry. It also made me cry (happy tears) to watch my boys go up and hug great grandpa.
While we were there, my grandma's sister had flown in from out west. She is two years younger than my grandma, but they look quite a bit alike. As she was up front viewing the body, Ethan says "Look mommy 2 great grandma's".
After that, we went to my grandpa and grandma's church where the women had prepared a meal for the family. After we sat down with our food, Ethan sees my grandma's sister and starts patting the table and chair next to him because he wants her to sit by him. She does and he says "we went camping at your house". Uh oh. He thought she was great grandma. She was great with him though. I did explain to him that it was great grandma's sister and from then on out he kept calling her the "other great grandma". It was great having her there. Even though we hardly know her, it was kind of like having grandma there. It was really strange seeing her standing next to grandpa.
We had calling hours then at the church. My grandma was cremated, so they had her table and a rocking chair along with her bible and a cross stitch that she had been working on in the front of the church. They also had a video playing that my aunt had made last year of the family (we had it made for their 60th anniversary). Quite a few people showed up including many of their Mennonite neighbors. Three of my friends from work showed up which was really nice. Tim's parents came and took the boys home with them.
After the calling hours there was a memorial service. My favorite part was when the pastor asked the congregation to raise their hand if their life had been touched by my grandma's gentle spirit (or something like that). Then he had the family turn around and look at all the hands that were raised. One lady later told me that my grandma had brought soup over to their house the night before she went into the hospital (the lady's husband had heart surgery).
The weekend of the funeral was the weekend we had set aside for our annual family camp out at my grandparents farm. Most of the family still camped Saturday night. We all went and sat around the fire and talked. It was kind of nice to get that first get together without grandma over with. I'm sure the mood was a little somber, but there was still a lot of laughter. Tim took the boys home for the night and I spent the night and slept, by the fire, under the stars with my cousins. I fell asleep to the sound of my cousin, Nathan, playing the guitar and softly singing.
On Sunday morning, we had a church service in the woods. It was a beautiful morning. It really couldn't have been any more perfect. My brother led the very tearful service. We all sang "It is well with my soul" which was kind of the anthem for the whole week/weekend. My uncle Scott read a poem that he had written about my grandma. He is not a poet, but God gave that poem to him. We all had lunch together then and went our back to our homes. (This was my view looking up during the service in the woods.) 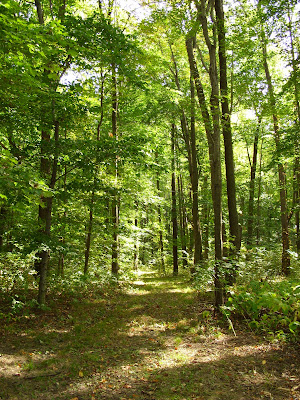 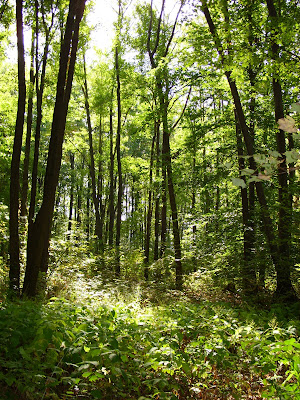 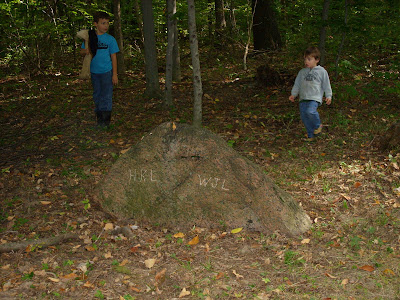 (This is a rock that my grandpa has put his and my grandma's initials on. )

In a week or so, we are having another service in the woods to spread her ashes.

It sounds very nice! Thank you for sharing. :)

Wow that sounds really nice. Very peaceful. Thank you for sharing that with us.

That was incredibly touching. I only hope my passing brings my family that close together, for their sake as well as my own. I bet she was a real special lady and someone who will be truly missed by what sounds like a lot of people. Thank you for sharing such a private moment in your life.

I love the hand raising thing

I love that it was a whole weekend thing. I always hated that we did everything in what felt like 3 minutes.