The weather this weekend was so nice! It's hard to believe that it was snowing and blowing just two weeks ago.

On Saturday, the boys and I ran some errands and then went over to Tim's parents house for lunch and to walk on the treadmill. Tim was cutting wood there with his dad. Then grandma watched the boys so that I could go see his cousin Valarie's "new" house. She got married two weeks ago (on that snowy blowy day), and now they are currently renovating an old farm house that belonged to her husbands grandparents. It was really neat. It even had a small room that the "hired hand" used with it's own small separate stairway to get there from the kitchen. That room is all cedar lined. I also got to visit with Tim's other cousin, Mindy, who has been really sick lately with kidney stones and infection. Apparently the Dr. told her if she had waited any more than 2 more days to get to the hospital that she would have died. She says that she has a new appreciation for life and that she realizes how important it is to talk to her kids more about God and eternal things and not worry so much about the things of this life.

Yesterday we went to church. I was in the nursery. I ended up having all 3 of my own kids in there, plus a couple of others. My helper was really good (she's the oldest of 6 in her family and loves babies) and the time went fast. After church we went out to eat at Pizza Hut. There is one not far away that has a kids room with a TV that plays cartoons and toys. I don't think the two older boys ate much more than a couple of pieces of sausage off the top of their pizza.

Then we went to this park which is near our bank. I love this park because it has all of the old things to play on like the merry go round (those are scarce around here), teeter totters, and monkey bars. 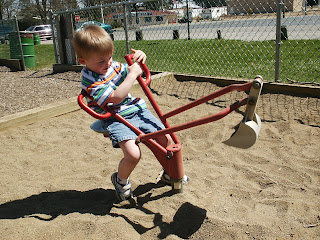 Does anyone know the official name of this diggy thing? I think Amanda has something similar. I'd like one for our play area. 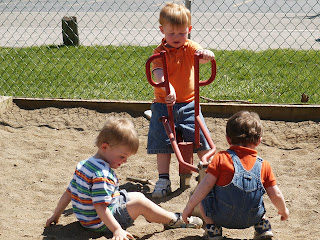 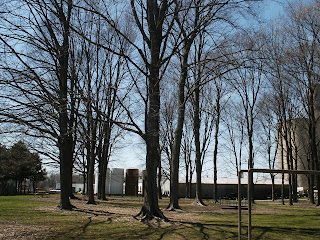 Tim said it was strange to have such a nice really warm (almost hot) day like this with no shade. The trees have no leaves on them yet! 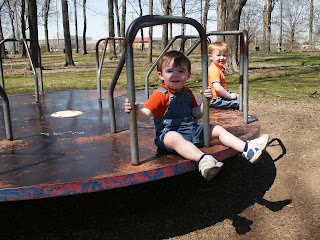 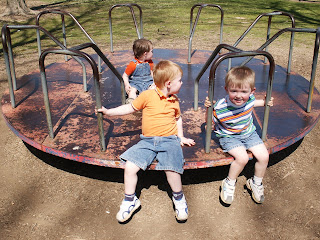 After the park, we stopped and got ice cream on the way home. Isaiah didn't want to eat his, he just wanted to hold it and got mad when I finally took it away from him. Then we came home and played outside, picked up some trash in the field, and washed up the outside toys that had been in the barn all winter.
Posted by Lura at 5:30 AM

that is my idea of a perfect day. I love the diggy thing too and when i was a nanny they bought one that went into the ground and i was with them when they bought it and it was a hundrend dollars but they bought it at this high end toy store (King Arthur's Court) so I don't know how much it would be somewhere else. Wow, that was a thousand word sentence.

I love Z's overalls. They look GAP, are they Gap? That park looks awesome.

Ethan looks just like a Cahill in that picture huh Cheryl and Jamie??

then you'll see me..."a girl like no one you have ever met before".

That looks like a lot of fun! I'm trying to figure out where that park is! We know a park down here that has a scoopy thing too. It is the best toy and everyone waits in line for it and fights over it.
Glad you guys got to go out and play.
I am also glad to hear that Mindy is getting around and such. I still haven't talked to her yet... I'm a bad cousin!!! Val's house sounds awesome!
I LOVE Ethan's stripped Gymboree shirt!!! ;)

They are Faded Glory.

Those pictures are really cute. I bet they tired themselves out real good and slept well that night, huh!? How are the big boy beds going??

Uhm, why do they call your son, Z?

I love the old school park stuff. The scoopy thing is awesome!! I'm glad you had a good weekend, we did too.