A week ago this past Saturday all of the boys got one on one time. Tyler went with daddy. Ethan went with me and Isaiah stayed with grandpa and grandma. I'm not sure what everyone else did that day (although Tyler did say he was going to spend his Valentine's money from grandpa and grandma on french fries!).
Ethan and I went to the Mennonite store (which you already saw pictures of). He decided to spend his money on candy corn that was in a bag the shape of a carrot for Easter. He held on to his money and then paid the girl. This was the first time I've let them spend their money instead of putting it in the bank. I also wanted him to hand it over, so he would know that he was spending it and wouldn't get it back. He was totally fine with it. Then we went to BW3's for lunch. It was yummy. Ethan ate his meal and half of mine! He also liked watching all of the big TV's. Afterwards we went to a Factory Card outlet where I got some great deals (can't post those, they are gifts), then to Target. I got this pitcher for $2.49 there. It was on clearance because it was with the Valentine stuff. I am going to use this in the summer to keep a pitcher of ice water on the dinner table. 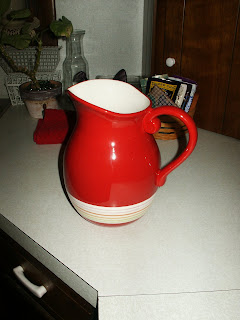 I also got these onesies for a friend who is having a baby boy in the next couple of months. ($1.75 each) 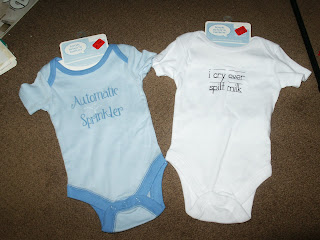 We also hit two thrift stores and I got these Usborne books for .49 each. 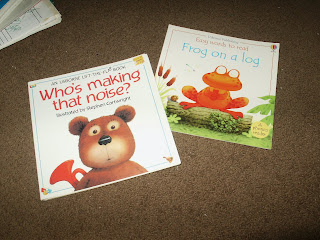 We had a really good time. It's so fun to see what they are like when they are away from each other. They are totally different boys.
Posted by Lura at 5:24 AM

Ahh, that's really cool. It's important that each child gets some one on one time.......I'm so glad they had a good time. I love that red pitcher!!!!

That's nice that they can all be split up and still have a good time. One on one time is important. I have seen so many twins who are inseparable. I'm glad you had a good day together, I love days like that.

Couldn't sleep! I was too excited to be going out with my favorite sister in law today!

You suck up! ha ha

That is really cool that you had some time with just Ethan. i bet with 3, that is not easy. We do it but not on purpose. Thursday nights, during Sunbeams, only Sawyer stays with daddy and Sammy goes with me and when I go somewhere (like shopping) I always take Sawyer and Sammy stays with daddy.
Those 2 books are very nice. There is something about those darn Usborne books. I like em too. The noise one isn't about a bodily function is it?? I hope not. I am sure you would have mentioned that part if it had. You would have NEVER let that go.

Nope, no bodily function sounds. There's enough of the around here already! Ha ha. I liked it because it says "Who's making that noise? Is it those noisy boys?", and then every page has an animal under the flap who is really making the noise.